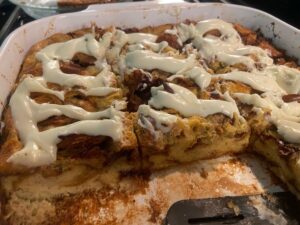 Cut the bread into large cubes (about 1 to 1.5 inches). In a bowl, mix the softened butter, sugar, and 2 tablespoons of cinnamon. Set aside. In another bowl, add the eggs, milk, Dunkin Donuts Extra Extra Creamer, salt, 1 teaspoon of cinnamon, and vanilla extract (optional). Whisk until well blended. Set aside. Place half of the bread in a greased 9×13-inch casserole dish. Garnish with half of the butter, sugar, and cinnamon mixture. Add the rest of the bread and cover with the remaining butter, sugar, and cinnamon mixture. Pour the egg mixture over the bread, making sure to moisten it well. Cover with plastic wrap and refrigerate for at least 3 hours, preferably overnight. When baking, preheat the oven to 375 degrees F. When it reaches the right temperature, place the casserole in the oven and bake for 45 to 55 minutes. Once the casserole is cooked, remove it from the oven and let it cool for 10 to 15 minutes. While the casserole is cooling, make the glaze. Mix the cream cheese and powdered sugar, stirring until no lumps remain. Add the Dunkin’ Donuts Extra Extra to the sugar and cream cheese mixture and whisk until the mixture is smooth. Pour the icing over the cinnamon French toast and enjoy!